Quiet as a house - a guide to internal acoustics for comfort, health and wellbeing
Bradford Enviroseal Weather Barrier exceeds the James Hardie Specification
Choose the right wrap to beat condensation and mould
The real risks of moisture and mould
Wall Wrap for Lightweight Clad Construction
Building for energy efficient comfort in Australian conditions
The numbers are in - exceed the building code and reap the rewards
Optimal thermal mass and how it affects building performance
Mind The Gap - The Dilemma Of Flexible Fire Barriers
It's a wrap - new study on wall wrap & air leakage
Poorly insulated homes are impacting Australian mortality rates
Ventilate it right then seal it tight for maximum energy efficiency

It's a wrap - new study on wall wrap & air leakage

Air infiltration and air leakage has been identified by The Building Science Corporation and the Australian Government as an important issue that needs to be addressed when building a home.

According to the Building Science Corporation website (John Straube 2012) “Stopping air is the second most important job of a building enclosure.  Next to rain, air leaks through walls, roofs, and floors can have the most damaging effect on the durability of a house.  Uncontrolled airflow through the shell not only carries moisture into framing cavities, causing mould and rot, but it also can account for a huge portion of a home’s energy use and can cause indoor-air-quality problems.”

Testing carried out at the CSR Research Centre in Western Sydney demonstrated that installing wall wrap can reduce air infiltration by up to 82%.

CSR Building Scientist Jesse Clarke explained, “As part of our research into energy efficiency, we designed an experiment to determine the impact of air infiltration through a typical residential wall”.

For the experiment, a 90mm timber stud wall was built on the face of a pressure chamber.  The test wall had two fixed windows, R2.0 Bradford Gold Batts, 10mm Gyprock, timber skirting & architraves, one power point and one light switch.  After an initial test with no wall wrap, the wall was wrapped with Bradford Thermoseal Wall Wrap.  The same testing procedure was repeated using Bradford Enviroseal Proctorwrap with very similar results.

Clarke says, “Properly installed and well-sealed air barrier wall wraps play a critical role in improving energy efficiency by restricting uncontrolled air leakage.  Not only are there benefits to the energy performance, but durability is improved by restricting humid air migrating into walls as well as more effective weatherproofing and drainage of wall systems, even in high wind scenarios.”

Clarke concluded, “Depending on the type of building construction, the air tightness and insulation levels of the building, and its climate zone, the selection of the right wall wrap is critical to ensure the energy efficiency and durability of a home”. 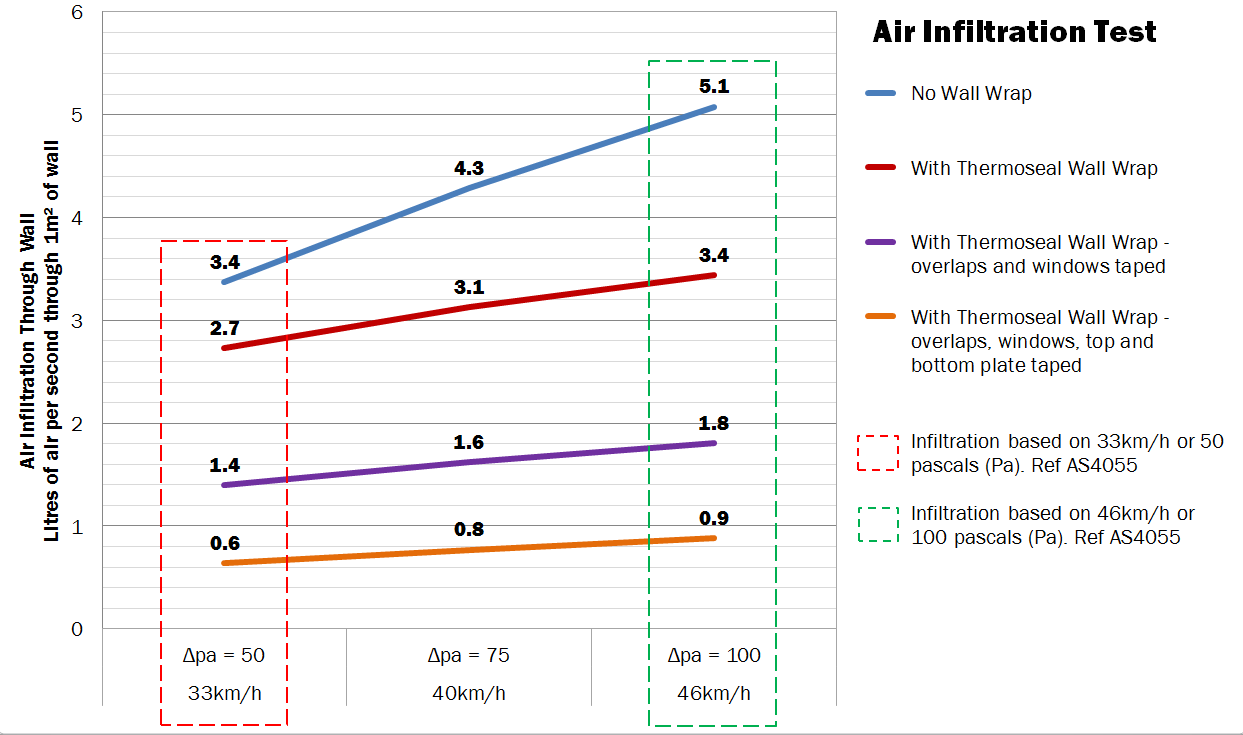 For architects, engineers and builders:

Bradford has experts located around Australia available to help architects & specifiers with their technical specifications.

Bradford offers knowledge training with the additional benefit of accredited CPD points in your office as well as regularly scheduled external events.